No upcoming gigs at the moment
All gigs »

One Way Out has produced two albums, the blues i calling (2006) and Caught in the Middle (2008). We're currently working on new material.

Listen to our 2008 album Caught in the middle via Soundcloud

Caught in the Middle by onewayout

Our second album "Caught in the middle" was published in august 2008. The recording's where made during the spring 2008 in Kivistö, now using a little more time to the process then with "the blues is calling. It contains eight original One Way Out songs and one Fleetwood Mac cover, "A Fool No More" from their 1977 released album "The original Fleetwood Mac".

Featuring on four songs, we got lucky to have the well laudable keyboardist Pekka Gröhn, known most recently for his work in Wentus Blues Band.

Engineered and mastered by Juha Takanen.

Listen to our 2008 album Caught in the middle via Soundcloud

the Blues is Calling by onewayout 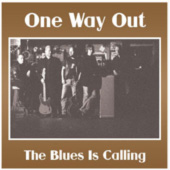 We published our first album "The Blues Is Calling" in the summer of 2006. Including 13 songs of our own and one cover, the bands title tune "One Way Out". The recordings where made in mid summer of 2005 at Juha Takanen's studios in Kivistö, Vantaa. Recorded pretty much live in one day, but published a year and "a few" set-backs later we finally managed to release the album!

A review by Pasi Tuominen at blues-finland.com (In Finnish).